Kirk to Enterprise: ‘You did what with the scripts?’ Back in the 1960s, our family lived in California. Life was bright, fun and sunny.

Among our “neighbors” – probably about a mile away – was a family whose patriarch worked as a Hollywood make-up man. One of the shows he did work on was Star Trek. The original Star Trek: Kirk, McCoy, Uhura, Spock, Scotty, Sulu, and those unfortunate crewman who never survived beyond the first scene.

He wasn’t the main make-up man, because I never saw his name in the credits, but he had some association with the series.

When Star Trek ended after a few years, he gave my dad a box of things. To him, it was just another canceled series, and there were other shows and other movies that required his attention. It’s the way of Hollywood.

My dad used to wear Spock’s ears to Halloween parties. I remember seeing them in a thick plastic case near the kitchen. They were spongy. I think that I might have gotten them out once or twice and held them up to my ears.

Of all of the family members, I looked the most like Spock, by the way.

In 1969, we left California and moved to Pittsburgh.

I don’t know if Spock’s ears made the move. They might have been thrown away.

I remember going up to the third floor now and then and pulling a script from the box and reading part of it. Then it went back into the box.

For some reason, I took one script to my room in the basement, and it ended up in my little storage cabinet.

DAMNIT, JIM, I’M A PARENT, NOT A SCRIPT-KEEPER

My brother and I graduated from high school in 1977 and promptly left for the Air Force, and I do mean promptly, as in 10 days after graduation.

I was honorably discharged in 1981, and restarted my life as a civilian. When I got back, my things were still in the basement.

One day, my other brother said, “What ever happened to all of those Star Trek scripts?”

And here’s where things took an unfortunate turn.

My mom hated disorder and clutter. About 10 days after we left for the Air Force, my mom went on a purging binge from the top of the attic to the bottom of the cellar floor.

You can see where this is heading. So, yes, among the things that she purged – put out for the trash – was the box of Star Trek scripts. It was only because of my carelessness four years earlier that one script survived.

By the way, I think my older brother wanted the scripts so that he could sell them. He was always scrounging for money, and to him the scripts equaled cash.

If I had them, I wouldn’t have told him about them, and I never disclosed the fact that one survived.

Here are the first three pages of the sole surviving script. Enjoy! 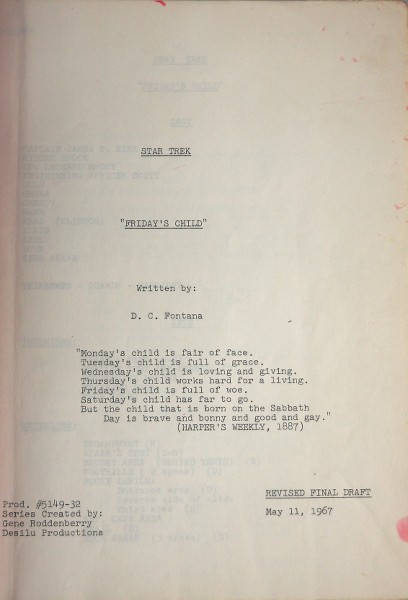 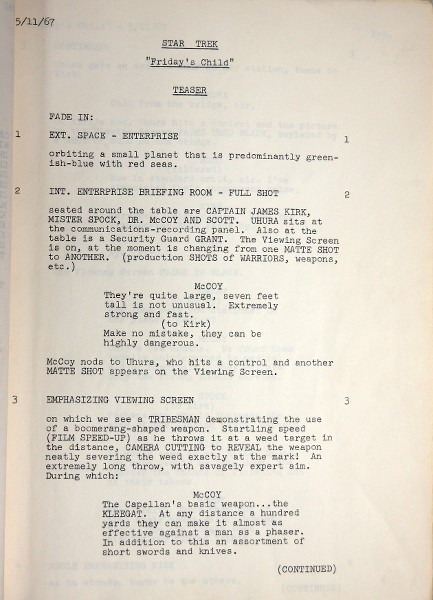 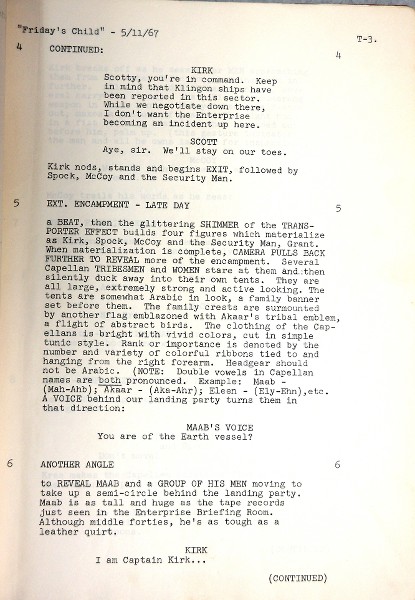